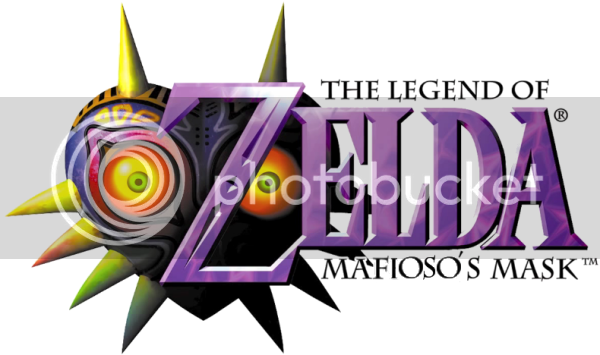 Now to set the scene, have some music


Somewhere deep in a forest close to Termina, a young boy is riding his horse. He is on a secret and personal Journey. A journey in search of a beloved and invaluable friend with whom he parted ways when he fulfilled his destiny.

After a while, the boy stops and looks around. Suddenly, two fairies rush at his horse and startle it, causing the boy to fall off. The horse, still spooked, turns round and runs away, managing to kick the boy in the head in the process. The boy is unconscious.

Seeing what happened, a masked figure emerges from the fog and approaches the boy. The figure begins to loot the boy. He finds a blue ocarina stashed in the boy's tunic. Intrigued, the figure lifts his mask, revealing that he is a skull kid. The skull kid proceeds to play a note. A shrill note comes out, causing him to laugh.

He tries again, and gets a much lower note. Skull Kid then looks at the boy. He's still knocked out cold but.....there's something familiar about him. He looks similiar to that boy who taught him a song in the forest. The skull kid then begins to think about the song. Unable to remember it, he tries to play it in an attempt to jog his memory. After a while, he thinks he's got it so he adds a little flourish at the end. However, he didn't realize that the notes he played were actually lower than the song he remembered. In actual fact, he ended up playing the song of time.


Suddenly, the skull kid vanishes from the forest, leaving the fairies and the unconscious boy behind. Having no idea where he is, he doesn't really notice that a lot of power has begun to emanate from his mask. Then, there's a bright flash of light. He pulls his mask down and closes his eyes. When he opens them again, he finds himself in a strange town at sunset. He can see a large fire in the distance, next to a big mansion. Confused, the skull kid plays the song again, hoping everything will go back to normal. With another flash of light, he disappears.

1. You may not post quotes or screenshots of any PMs sent by the host, whether they are real or doctored, nor may you send them to people outside of this topic.

2. You are allowed only one post after you die or are replaced. This post may not contain any information or speculation regarding the game.

3. Each game day will last for 24 hours from the last update post unless an insta-lynch ( a player receives 50% of the votes plus one) happens and I get all the night decisions. In that case I may speed up to the next day if you ask for it. After that, no votes will be counted until the next day begins, so be sure to check the post dates.

4. The night phase will be dealt with during the rollover from each day to the next. If your role functions at night, you must send a PM regarding said role during the day. All information roles will receive their information that night. If you do not use your role's ability, you cannot use it multiple times the next day.

5. Anyone who does not vote (except if they post to state that they will abstain from voting) for two game days in a row will be replaced. So get your activity guns ready.

6. The game may not be joined after role PMs are sent, except in the case of rule #5.

7. NO BRIBING THE HOST TO GET INTEL ON THE OTHER ROLES.

8. Dead players are DEAD. They can't talk about mafia and live players can't interrogate them, either ingame or outgame until the game is over.

10. IF YOU ARE DOING A THEMED ROUND (I.E. basing it off of some other mythos) and the host decided to give you a role with a name (I.E. The Doctor role is The Medic from TF2 or Iris from non-classic Mega Man), you can reveal ONLY your role: you cannot reveal your name. This goes for the Mafia "revealing" roles as well.

11. The host reserves the right to kick you out of the game for any reason should you interfere with the game in a way not outlined in these rules.

12. A violation of rules 1, 2, 7, 8 or 11 is grounds for immediate removal from the current game, and the next game as well. He will also not be able to host the next game, so BEHAVE.

13. Disobeying 2 rules in a single game will ban you for the next game. This does not overlap with Rule #12.

Signups close on the 23rd at 1PM EST.

Can't wait to see what roles you're gonna do. Sign me up!

Ok, to make it easier for some to join, I've moved the sign-up close time back a day to Saturday the 23rd at 1PM EST.

You've met with a terrible fate, haven't you? Now don't think me rude, but I have been following you... For I would like to join this game.

Well, I've got exams... if it starts around the weekend I could make it.

I'm in... Can I be a useless character? I seem to do better at mafia when I have shitty abilities

SIGNING UP SO HARD

Joining. We need to beat this in three days.

I'mma sit this one out because it's starting when my summer school starts so I'll just observe this one for now.

After playing the Song of Time about 20 times, Skull Kid begins to realize he has almost no control over where or when he will end up. The only thing he seems to be capable of is sending himself back to that strange town he ended up in after the he played the song the first time. However, with each visit, time seems to have moved forward. He noticed that on the third visit, the fire beside the large mansion suddenly disappeared.

Then, on the seventh time he travelled to the town, the Mansion was gone. As he looked around, he saw that the buildings within the town were in a terrible state. Some buildings had partially collapsed, others had collapsed completely and all that was left of them was a pile of rubble.

At this point, the Skull Kid was beginning to get bored. He played the Song of Time one more time. After the bright flash of light, he found himself in the middle of a long corridor. The corridor was made from a very smooth grey stone and had a long red carpet running along it. There was also windows looking out onto nearby gardens. Unfortunately for the Skull Kid, it was also lined with royal guards. Realizing he didn't have a lot of time, he immediately began to play the Song of Time. He thought he was safe until he felt a hand grab him from behind just as he disappeared from the corridor, leaving all those that seen what happened bewildered.

Okay, I should be able to make it.

Role PMs will be sent shortly.