Signs-ups closed,due to some unforseen things game may be late to start. so yeah bare with me.

ROLES SENT NOW HAVE A STORY!

"Daten city,a place close to heaven and hell
This city is plagued with ghosts more then most
But this city has two angels to protect her
Two bitch ass angels who won't get off their asses and do what they are suppose to do!"
Inside a odd looking church stands a large black man with a giant afro at the pulpit in
front of two girl on a heartshaped couch,One was blonde in a red minidress and the other had
black hair with a purplestrips intwined and looked gothish,these two were panty and stockings
the "angels" that protected datan city from ghost attacks.The large black preist was their
guardian, Garterbelt. "Listen up angels we have a new crisis on our hands!" Garterbelt would bring up a white board with already draWn pictures on it that nobody cared for. "Hey shut up invisible voice!" Cried the large black douche."Oh fuck off,anyway the citizens of the city are being abducted by the deamon sisters and are being used to power their new ghost factory!" Panty was picking her nose while Stocking was enjoying a peice of choclate cake.Gaterbelt continued "and if that wasn't bad enough dem bitchs are wearing disguises to lure people into dark alleys just to have their way with them!" Panty snorted some "So what you want us to go in,bust some nuts,and get out right?" Garter glared at panty "Hell no,you two cost me too much money by destroyin most of the city,this time we are gonna try something different." The large man handed panty and stocking a book and stocking looked at it with her spoon hanging out her mouth. "What the fuck is this shit,you want us to beat them over the head with it?" Asked stocking not really careing much. "No you bitchs,This books contains the pictures of eveyone who is suspected to be the deamon sisters,you're gonna go around town and and have people pick out who they think is the dirty pair and then hunt them down and kick their asses!" Panty scoffed some "Why don't we just kick everyone's ass that's in this book and just be done with it?" Garter glared once more "Because everytime you bitchs go out and start fighting you destroy things and I can't afford the shit,this should lessen the property damage and save my wallet!" Both girls rolled their eyes at the preacher. "Yeah whatever,we'll do it your way i guess,long as it gets us the hell outta here." Garter would extend out his hand towards the doors as panty and stocking stood side by side. "Now go my angels and deliver holy justice to those filthy deamon whores."

ROUND 1 Start mother fuckers!
Round ends at 10 pm PDT /1 am eastern
Reminder no PMs and no role reveal until it is said so!

Well time to start this fucker.

Have a vote to show how much we missed you man.

Correctan and votan. I never did trust vegetables.

Yoshi wrote:2. Void clause is in effect for no lynching

Good question. At the very least, you weren't the only one that missed it.

Shadi wrote:Rule 3 is how we do it on nD mostly and we have roles that are the cause for role reveals so it'll be an interesting game.

Wait... I misunderstood I think

Does it say WE are not allowed to role reveal or the host doesn't role reveal? Coz what I thought at first is the latter but re-reading leads it a bit to the former.

You guys are not allowed to role reveal until I say you can.Doing so will result in a punishment.

'Aight Frenchy, your time's up.

Yoshi wrote:You guys are not allowed to role reveal until I say you can.Doing so will result in a punishment.

Fair do's, then I misunderstood good I asked first.

The first person to vote starts a bandwagon? Only a daemon would do that. They can, after all, control luck.

Oh man, my first game back and already a threeway.

time to pick people at random >~<

MrNaleIt wrote:Oh man, my first game back and already a threeway.

Gonna stay away from the bandwagons for now

Polls closed,story and such will be up soon! 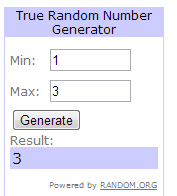