I wear lacy thighhighs and a female character's suit. ._.

A suit looks good on any gender.

A suit looks good on any gender.

And so do thighhigh stockings.

Is this another trap?

You say that like I haven't posted Jun before.

I can stop anytime I want. I swear.

Getting worried. I invested heavy in those turnips. What am I going to tell the Nook? If things don't improve by Saturday I might need to jump off the top of the Train Station. 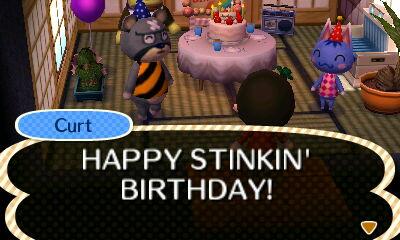 Aw man, I need the screen to go with my tatami mat flooring.
/jealous

This damn game for making me feel.

I hadn't played in a few days and then I got a letter from Beardo telling he'd be leaving tomorrow. Now he wasn't a starting citizen but was one of the first people to move in. Funnily enough, before he moved in I had read the ACNL review on Kotaku were the reviewer wrote of his hate for Beardo.

When he first moved in, I didn't like him much. He was a bit snooty, he didn't look 'cool' and so I was ok if he left.

Previously only the villagers I liked (talk to all the time, send letters) have asked to move and I've said no. Here I didn't get a chance to say anything cause I didn't play. (also I don't understand how one guy I say, "sure move!" decides to stay!!!)

So when I find out he's moving, I'm like oh ok. Then I realize.
For the last week I've been bringing him medicine every day to get over his sickness. I checked in to see if he was ok, bought him his medicine, and he sent me thanks. I started to grow attached.

I talk to him before he goes, then he moves and I get the sad letter in the mailbox and now I miss the guy.

I'm playing ACNL in front of my son, and he's laughing deliriously cause I'm hitting crackle with my bug net and wants to me to keep going, but I stop because I don't want to hurt his feelings more. This coming from a guy who has made Lara Croft die over 100 times in every conceivable way in Tomb Raider just to see the death animation or if it's possible.

"Hm, I haven't been on Animal Crossing in a while, I wonder how my town looks-"

...I think Isabelle was wearing Merry's head as a hat.

At least your town can be fixed quickly. Regrowing the grass between my house, the cafe and ReTail is going to take forever.