The link itself is saying I can't see the image but assuming it's what you hotlinked I don't like where that picture is going.

Alpar wrote:The link itself is saying I can't see the image but assuming it's what you hotlinked I don't like where that picture is going.

Considering the fact you have to log in to see the image I'm not really trusting it's something worth seeing...

That link is just for sourcing purposes.
There's a companion post in the Skype thread.

I can see the image embedded properly now.

I'm getting all sorts of sick feelings looking at it.

Well since I decided to go ahead and look at the picture I couldn't help myself from laughing my guts out of my ass at the "Alps" part. 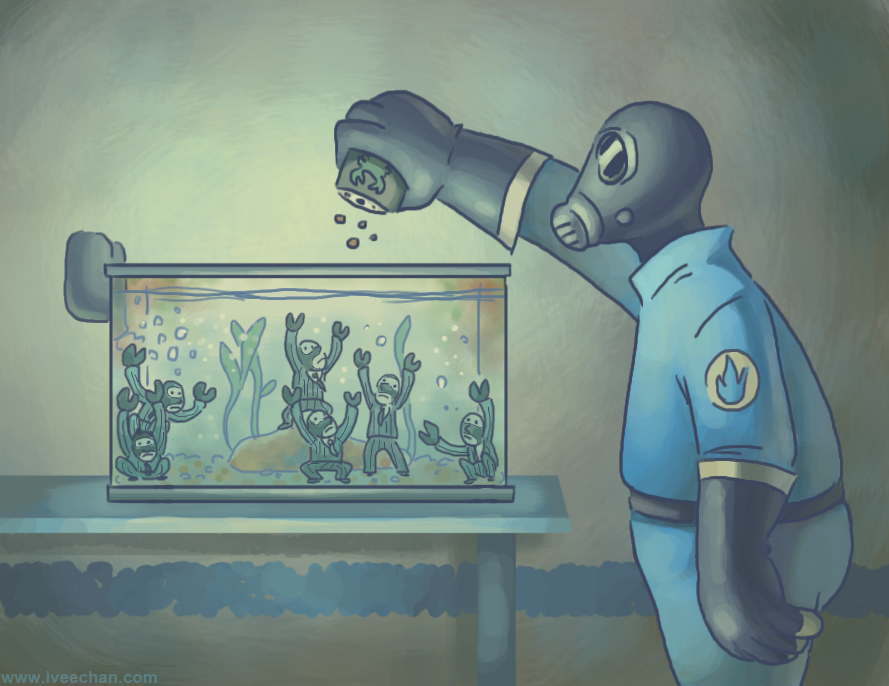 Well? Opinions? Anything I could add/remove/change?

Height on the legs

round out the shoulder pads to look less pointy and more protective, same with the "boots" and the arm covering. Not every part of armor (especially not Megaman armor) needs to be so pointy.

Outlines need to be somewhat stronger for more visibility

also is Amy left handed? If so, keep her buster there. If not, switchyswitchy.

The elements of the overall design look fine.

hey friends i guess i could take some requests :3

Do they cost money?

I dunno, something... Mega Man?

epic dragon raichu if so willing~

I'll just post this one more time for everyone so I'll never have to link it again. I updated the OP with this link as well.

So, the discussion last night regarding subjective vs objective ended before I got a chance to join in, which disappointed me a bit. I hope I'm not committing an atrocity by bringing it up again (One of my final year papers was about objective / subjective art, so I really wanted to join in Q__Q), but after reading everything that was said, I'm actually left with the feeling one often gets looking in from the outside: That both parties were kinda right but looking from different perspectives.

I the main thing which I didn't see mentioned (apologies if it was! I think Tael brushed on it?Turns out Tael and Phen both did. Shows what you miss when recapping the chat... >__>) was the idea of different genres, which is crucial for understanding objectivity of art.
I believe the comparison of Dubstep and Mozart came about. Two radically different genres, both very popular. Can we say either are simply objectively bad? Not really. BUT! We can say that Mozart is objectively bad from a Dubstep perspective for failing to have bass that wubbeth, while the Dubstep fails to be objectively good 17th Century Orchestral music by not observing the laws of periodic phrasing, functional harmony, and development of exposition material.
Meanwhile, almost everyone will dislike Serialism, a type of music I had to study in A-Level Music. Each of the 12 notes of a western chromatic scale are assigned a random number from RNG and must be played in that order. This is called a series. The you start adding other instruments playing, for example, the inversion of that series. If you get one of the notes wrong, that is BAD Serialism (It's so hard btw, and not at all rewarding to write). Get it right, and it will still sound awful to the majority of humans. Objectively good Serialism will sound Subjectively bad to most people.

The same ideas can be applied to visual art too. Alpar is practicing very hard to become honour to family and improve his art. However, his art is only objectively improving in relation to the schools of art and mediums which he is pursuing. A fan of cubism won't be enthralled with a fantastic manga-style sketch, for the criteria for creating objectively good cubist art are vastly different from those of manga.

I saw you guys talking a lot about tastes, but really genre is key.
So Alpar is right: art does have a measurable value BUT only in relation to its genre.
Opposition was also right. (Especially Tael? You're very wise bro.)

It is entirely possible I somehow missed the point here. That would be embarrassing. But I enjoyed writing this very much. I think I've having withdrawal symptoms from final year essay writing :-/

Wow, that's an extremely good input, wish you were on at the thyme! We did a little bit on serialism in my final years of high school, it was really cool

Nah, you did good.

The argument was over whether art and music could have an objective value for measure.

The only thing I was really gonna say to Phoenix was that art all shares something in comparison when being judged from what I'd understand as objective value and what the opposite side would understand as "doing your best to appeal to as many people as possible while retaining the realms of subjectivity", for lack of an actual word that mashes that all together.

From how I understand it, (like MARCUS said) what makes art have objective value is the skill in which it's crafted, in order to be able to send forth a message. Even if the art looks incredibly surreal, it could still be very stylized and therefore still worth quite a lot; hence why pieces that are worked hard on get more money than let's say a kid's recess drawing (as Tael said yesterday for example.)

That's mainly where artistic value lies from how I understand it; conveyance and style. Of course skill in the case of art would naturally go hand in hand with conveyance. You could do what I'd call "symbol drawing" (like a sharp oval and a circle in the center representing an eye as opposed to adding details like line depth and shading with coloring) and that would prove the case of what I'm trying to get across. You'd naturally guess that a completely realistic and detailed eye would look more like an eye than it would the symbol drawing example I mentioned, henceforth more objective value, if nobody minds me using that term.

That's the main reason why I tried to mention that the Mona Lisa and said 3 year old scribble ARE comparable in terms of art, even if incomparable in terms of skill and "genre". They both fall under some category of judgment, like every piece of art, lots more which I haven't mentioned like palette. But we don't need to dive into that.

There are also people that have a tendency to mix up personal taste with what actually is, and vice versa. Rofl's example of Sharknado and Captain Pronin being objectively horrible on plenty of levels yet still retaining through personal sense of worth in hilarity is an example I'd like to use. Also my example of "I don't exactly like the Mona Lisa but I will admit that it's a great piece because this and that are masterful."

I almost apologize for having to bring this back up again but at least through posts instead of IM we'll hopefully make somewhat less of a mess. I think we completely understand eachother though.

But you know what? I kinda digress, Zink. You do have a pretty good point there.

Always gotta be the third party taking the glory.

Aw, cheers Tael. Impressed you liked Serialism, my whole class hated it! (One guy sat rocking back and forth on his chair in the corner till it stopped) What do you play btw?

Alpar wrote: The argument was over whether art and music could have an objective value for measure.

Ah ok. I was more focussing on whether something could be objectively good/bad.

Amusingly I just stumbled across this piece on that topic. As the author says, it's a fairly flawed study, but I suppose it's interesting/relevant.

I think I can get on board with what you and MARCUS say in that an artist's skill gives the art more value. I guess it's because that skill is so multifaceted and hard to define that I find it hard to say for sure if I agree, but I imagine that as a concept and a general trend more skill as an artist gives more value?
Perhaps it depends just how objectively we're looking at things. Ignoring the human concept of the artistic merit of the finished product, the more something has put into it (in this case layers of complexity and skill) then the more it's worth, regardless of what people think of it. And then there's the question of rarity. While every artwork is arguably unique, having a greater level of skill will allow the artist to create something even "more unique". (I appreciate that 'unique' is a binary concept, but I can't think of a phrase that explains it any better).

So I'm leaning much more now to the Art can have Objective Value side of the fence, but it depends entirely on one's definition of 'objective'. Perhaps that's where the differences with Phoenix lie?

Alpar wrote:at least through posts instead of IM we'll hopefully make somewhat less of a mess

Yeah, I deffo think this kind of discussion is ill-suited for IM.

LET IT BE DONE.

Also Vat wanted a doodle of me having a naive moment.

Whipped this up in about 20 minutes.

So I got Staedtler 0.4 mm superfine point ink pens today.

This is pretty much training for 0 stabilizer on your tablet and a cure for chicken scratches.

Also many updates to the op.

You know I haven't checked in on Tom Preston in a while.

Ever since that whole fiasco last year where someone maximum wrecked him along with a bunch of other vocal people, I felt a little relieved he was going to finally take it upon himself to take a break from art and try and take criticism and such when he finally returns!

I wonder if his principles got any better.

I mean... I think his art at least got better. Slightly. Maybe?

Also can someone help me figure out why I hate this artstyle so much.

something about it just makes me feel angry.

It's got a severe and obvious case of Tumblr nose for one thing but that's all I can think of.

I don't understand why people make such a big deal over Quiet's design. Although I really love how Kojima said "But once you recognize the secret reason for her exposure, you will feel ashamed of your words & deeds."

As far as those particular drawings go though, I think maybe it's the expressions, I'm not fond of that particular type of facial exaggeration.

Alpar wrote:Also can someone help me figure out why I hate this artstyle so much.

For me the turn-off is that they've all been drawn in Disney style, which REALLY grates with the source material.

The Mysterious Gourmet wrote:I don't understand why people make such a big deal over Quiet's design.

For the same reason people make a big deal over all unnecessarily sexualised character designs. It's nothing new. You've grabbed my interest with that quote of Kojima's though. If he's found a way to justify it then I'd love to hear it!