I was thinking about the fact that given our record, she could ki- wait, nvm. The fact we know the role exists probably means we won't get more than a 2 way tie anyway.

EDIT: Trust the best Touhou Link pic (including my round 6 avatar) to be Sakuya.

I guess I'll join this party without disappearing this time, plus awesome concept and touhous.

You should all join this round already~

Alright turns out I won't be able to partake in this round. Going through shit so yeah don't have time for this.

I'm joining, but not because the Skype chat promised me yuri.
Although, if some happens to show up...

Zink120 wrote:I'm joining, but not because the Skype chat promised me yuri.
Although, if some happens to show up... 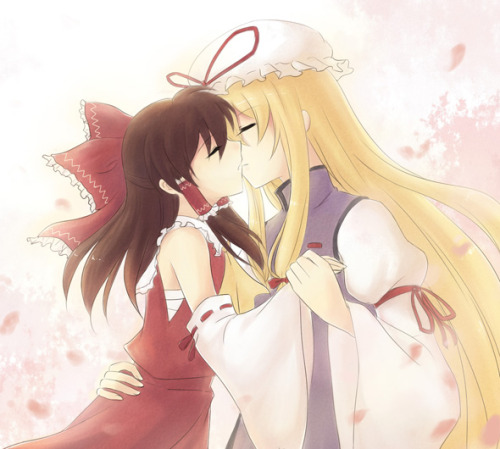 Roles are pretty much assigned already. Just waiting for the official closing time to send them out.
_________________
Heka: "If you mean to kill me, at least do it quick!"
Raidy: "I'm afraid Fonfon is quite good at hurting you without killing you."
Fonfon: "You bet I am! Corpses don't scream, so that's boring."

Quick reminder, make sure there's room in your inboxes for your role PMs.

“Right, I'll get some more dango,” Byakuren Hijiri said. “Mina, can you come with me? We need to prepare some more tea as well.”
“Of course, Lady Hijiri,” Minamitsu Murasa said, following Byakuren back into the temple.
“See, this isn't so bad, is it?” Yukari asked.
Reimu sighed. “Well, there's free food and booze, so I guess I can't complain.”
A hand quickly reached in and snatched a rice ball out of Reimu's hand.
“H-hey, what gives?!” Reimu yelled.
“Plate was empty,” Mima said, popping the rice ball into her mouth.
“Ugh, you... why are you here?”
“Isn't it obvious?” Mima smirked. “I was bored, and it's always fun to annoy you. But it looks like I won't be bored anymore...”
Reimu cocked her head. “Hm? I always figured you weren't the flower-viewing type.”
“Not that,” Mima said. “I overheard something... interesting.”
Yukari knelt down next to Reimu and Mima. “Oh? And what was that?”
“That nue... er... what's her name again?”, Mima said, scratching her head.
“...Her name is Nue,” Reimu said plainly.
Mima giggled. “Wow, really? The nue's name is Nue? That's stupid. Anyway, she and that tanuki were talking about playing a big prank on everyone today.”
Marisa poked her head into the conversation. “Eh, really? What kind of prank?”
Mima stared at Marisa for a moment. “...They... didn't say...”
Yukari sighed. “Those two... we should tell Byakuren about this.”
“I don't see why,” Reimu sighed. “What harm can a prank do?”
“This is an important day for the Myouren Temple,” Yukari said. “I haven't seen humans and youkai together like this in a long time. If something were to happen, I'm worried that they will continue to seclude themselves from each other.”
Marisa nodded. “Right. Want me to go tell her?”
“That's fine,” Reimu said. “Just leave me out of it- ...Mima, you've been staring at Marisa this entire time. What's wrong?”
“...You're not Marisa,” Mima said flatly.
“...Eh? W-what are you talking about?”, Marisa stuttered.
Reimu leaned in closer to Marisa. “...Yeah, I should've realized it before. You look like her, but you don't act like her at all.” Reimu took a single ofuda out of her pocket. “Let's see, then.” She quickly slapped the ofuda onto Marisa's forehead. Suddenly, a blinding light erupted where Marisa was standing. When it faded, a small blue-haired girl with an umbrella was standing in her place.
“...Ah, the karakasa? Kogasa, was it?” Yukari observed.
“Boooo~,” Kogasa whined. “I didn't think you'd find out that easily...”
“You couldn't have picked a worse person to pretend to be,” Mima said. “So spill it. What's this prank that Nue is planning?”
“N-no prank, honest!” Kogasa yelled. “We just wanted to play a little game!”
“What kind of game?” Reimu asked.
“Nue said we were gonna disguise ourselves and make people guess who we were,” Kogasa said.
“Ah, that girl can be troublesome,” Byakuren said, having been listening in over Kogasa's shoulder.
“Byakuren,” Yukari said. “What do you think we should do?”
Byakuren scratched her head. “Well, I'm all for a game, but... I've seen how you people tend to take things too far. And Nue can get carried away quite easily... I guess, at the very least, it's my responsibility to make sure people don't get hurt too badly because of her actions.”
“Well, that settles it, then,” Mima said, slapping Kogasa on the back. “Go on back to Nue and tell her we'll play her game.”
“Alright, Reimu,” Yukari said. “You better step up, because I don't like to lose~.”
Reimu nearly choked on the rice ball she was eating. “W-wait, why do I have to play?”
“C'mon, it'll be fun,” Yukari smiled.
“No way. Do what you want, just leave me out of it,” Reimu spat.
“All right, let's have a vote then,” Yukari huffed. “Just the three of us. All in favor of making Reimu play this game?”
Mima and Yukari's hands shot into the air.
“...I hate you, Mima,” Reimu sighed.
“Hate you too~,” Mima replied.

Oh, I forgot to mention, if you don't vote, I'll put you down as abstaining and reduce your spirit accordingly.
_________________
Heka: "If you mean to kill me, at least do it quick!"
Raidy: "I'm afraid Fonfon is quite good at hurting you without killing you."
Fonfon: "You bet I am! Corpses don't scream, so that's boring."

Welp, first day abstaining because I don't want to accidentally lynch Reimu on day one.
That would be bad for my health.

Voting Zyq cause he is always Mafia

Nyu because why not.

spp vote because abstaining in this round is bad, apparently.

Nyuvotan. It should be obvious by now that this abstaining/forcing ties behavior only helps the mafia and third-party roles, and even if you didn't notice how the mafia abuses of it, last round should have teach you that.

I think I'll vote for spplmj for this day.
Don't have a reason and I'm hoping the first day goes well.

I think I'll vote for spplmj as well.

Oh yeah, I forgot to theme my avatar.

(And yes, I'm just going to recycle my avatar from the last Touhou round.)