Welp, it's the week before spring break and all my classes (except one) are having tests this week and I'm really not in a creative mood atm. I'll leave you with the video I would've used in the story, but I'm gonna leave it at that for this round. Sorry guys; I'll be sure to write something for next time. 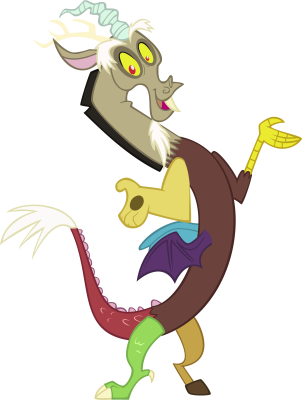 Hey Stalin, you are Discord. Corrupted by the Darkness despite the shattered state your Love left it in, you love the freedom of Chaos. Where others fail, your carefree magic will succeed. You hate Celestia and vow revenge for her cruel punishment that turned you to stone for a thousand years. Now's your chance to reclaim your throne as Ruler of Chaos.

Once during the game, you may wreak chaos on the entire game, causing all non-evil players to target other non-evil players randomly with any powers they use. Players will not be aware that they were redirected unless their power showed up on the event list (eg, a kill). This power does not redirect powers that do not require a target from the user, nor does it redirect lynch or lynch votes. Additionally, you are bulletproof and can only die by lynch (unless roleblocked).

Your teammate, Chrysalis (Nale), is revealed to you because the good team won part one. (If good had lost, you would instead be able to peek for evil/not evil each round.) The two of you win if you can reach parity with the village.

Zyquux made his last stand and lost: You are Shining Armor, loyal protector of Equestria and captain of the royal guard. You are husband to Princess Cadance and brother to Twilight Sparkle, both of whom you love dearly. Though Chrysalis once deceived you, you have steeled your resolve and are on the lookout for any anomaly that might reveal the Changling Queen's whereabouts.

Each round, you may protect a player, redirecting any kills targeting them on to yourself. If this power is used to block an attack originating from an evil player, you will retaliate and kill the attacker.

What Zyquux didn't know:
If Zyquux had been corrupted in the first part, his role would be exchanged for a neutral one with the following powers:

The evil team has been eliminated... but we're not done yet! And so the game goes on. Good luck, to those of you who remain.

If you don't count Scept surviving the lynch, this has been a perfect Book 2. Just sayin'.

I did my job well enough, so it's up to you guys.

Well, I was roleblocked this round. Fuck.

I've seen neither hide nor hair from Zink lately, and he hasn't said a thing about his role.
[vote Zink]

Yeah sorry about that, having a Full-time job is suffering ;__;
I gave a very extensive role reveal on page 10 that it sounds like you missed.
It's interesting to note that I too was roll blocked last night as well, which could mean a whole host of things. Something to bear in mind.
Since this is the last day I think we should all think very carefully before we place our votes.

You did reveal, but that was your part 1 role. What about part 2?

Fair. My power is to change someone's target if they are using a night action. There is a chance that this had an effect on the first night of the second part of the game, when I used it to make Nale target HATER, but Rain has held back that info. It should be noted that my power only has an effect if they were already going to do a night action, I can't cause it.

I suggest you take your vote off me, even if you do want to lynch me in the end anyway; we are so close to winning this and if one of the other two can persuade eachother to bandwagon on me, then it's over. I reckon we can work it out, but you need more to go on than what you have on me.

Very well. [no vote] (unknown command)
Hater is suspect no. 2. He hasn't placed a vote in five days. It's like he's content with watching us kill each other off...

Tbh for the whole round I've been thinking French is third party, and that's what we seem to have left. Shame we don't have much to go on. It would be nice to hear more from HATER.
HATERM8, I know you said before that there doesn't seem to be much gain from interaction, but in this stage of the game surely you have some things you want to share?

That's all I really have to say on the matter.

Scept wrote:Er... [vote no lynch]? Can't figure out how to remove my vote.
Oh, there it goes.

To remove your vote, use [unvote] or [abstain].

Voting for no lynch is entirely different, and also accepted in this game. If no lynch wins, nobody is killed.

I have a feeling that the others might be hoping to float their way to victory by not saying anything...

Well I'll add a small clause to my previous claim. I can roleblock, and have blocked Stalin->Scept (to remove his kill immunity R2 in case we had a vigilante)->and Hater this round based upon his neut-sounding/potentially hazardous role. Furthermore, I am VOTELESS; or rather, I REMOVE votes from the total lynch tally (hence why I've been voting for targets that won't get lynched).
I have a feeling that Mafia is dead, and that the Neut role is in fact the only role alive. Though that may turn out horribly wrong if we get night-killed.
That said, my I've suspected every one of the players this round. My original hunch was Scept being Mafia because of his claim. Then Hater made his random'esque reveal, which struck me as third party. I'm fairly sure that based on his claim, Zink is Cadance. Easiest way to find out whether he is or not is by getting a counter claim (that should at least narrow down the list of suspects to 2); otherwise imo he's safe.

My money is on Scept or Hater, but I can only [vote no lynch] to prevent that result from happening. It's up to you 3 to sort out this mess imo. Good luck!

Only two votes are required for lynch now. Good luck everyone!

French Connections wrote:I'm fairly sure that based on his claim, Zink is Cadance. Easiest way to find out whether he is or not is by getting a counter claim (that should at least narrow down the list of suspects to 2); otherwise imo he's safe.

Careful, you're getting mighty close to breaking rules there. As far as I understand it, the common rule here is that players are not allowed to claim (or otherwise hint at/confirm) their name. I don't see anything wrong with speculating about other players' names, but be careful that you're not encouraging them to confirm or deny your speculation. I made a specific exception for Love and Darkness in the first phase of the game because so much of the game centered around them.

Edit: Actually, strictly speaking, speculating on someone else's name kinda implies that you are claiming not to be that role. So I'd just rather not have any sort of speculation on names period. I won't modkill or do anything drastic for that one, but don't do it again.

Psst, and the irony of all this is that Cadance is already dead (see chapter one of this book), so it can't possibly be Zink.

Tbh I think it's HATER too.
French is paying way less attention than usual so I don't think he has an important role.
I'll give HATER four hours to make a case for himself before I place my vote.

Whee, isn't that fun. Seems like we've had voting shenanigans every single round this game. Round (and game) is now over, as of Scept's vote a couple hours ago. Unfortunately, I am still in class and won't be home until very late tonight my time.

I expect to be home around 9PM, and I'll likely spend a couple of hours writing a story and compiling all the actions, awards and comments. Expect a post sometime after 11PM EST.

I almost want to spill the beans and let y'all know who won... but I think it'll be more fun for everyone if I'm mean and keep that to myself until the 'big' post. And don't any of you go spoiling who you were. ;)

Whoa what it's over!? I'm guessing that whoever won knows they did.
Gaah I bet it was French >___>

I'll be honest, the game took way too long. I don't think the incredibly specific kill conditions in part one were a good idea...

Well, each to their own. Best round I've played in ages!

Scept wrote:I'll be honest, the game took way too long. I don't think the incredibly specific kill conditions in part one were a good idea...

I would probably blame the day end condition instead. The number of days itself wasn't really horrible, but every "day" ended up taking multiple real life days.

Well, first off, let's make up for the lack of a story last round and finish that up properly. More to come shortly.


Twilight paced in the throneroom, a seething mess of regret, guilt and hopelessness. How could she let Celestia down like this? How could she, Celestia's most trusted student, fail so utterly and completely? Discord floated in the corner, absently staring at the many stained glass windows that occupied the room out of apparent boredom. He would occasionally pose a carefully crafted question to Twilight designed to cause her even more despair. And it worked, for the most part. He slowly nudged the alicorn over the brink of insanity and giggled to himself at how easy the whole thing was. With Celestia out of the way, there was no strong foundation to keep the others going. Perhaps it was better that the replacement had been found - this was certainly the swifter way to conclude his plans.

"...but it seems like there's someone orchestrating this from the inside," Twilight continued, catching Discord's attention again, "someone who knows us all well enough to predict what we'll do ahead of time. Sombra and Chrysalis couldn't do that, as they've proven several times now."
"But Twilight," Discord retorted, slightly nervous at how close to home Twilight had hit with her last statement, "none of your friends would ever want to harm you."
"You're right," Twilight concluded, putting Discord's mind at ease, "but you might."

Discord was caught off guard by the frank statement, but he recovered quickly, reassuring Twilight of his loyalty to his friends. Twilight questioned him on his whereabouts during the time Celestia was gone, and why he hadn't lifted a finger to help when she and Rarity had battle Chrysalis. Discord, caught in his lie, took preemptive measures and wielded his magic to secure the Elements of Harmony, which he suspected Twilight was about to use to banish him to his stone prison again. Unfortunately for him, Twilight was faster on the draw and had already activated them...

Note: This is merely the story for the last round's events, posted here.