Go back to your pink whore.

Go back to your pink whore.

no both of u. besides, leo already has a dark skinned dancer, so here's mine.

Oh, so you guys are always saying I need better waifus. But now that I found one, you're all "NO U CANT HAVE HER." Gee thanks, guys.

Even if announcing a new waifu is a very endearing and precious moment for you guys, I don't think it qualifies as "videogame news"

Actually, Leo said how much he wanted the game, and it devolved into this.

I never said anything like that.
I've teased you about Amy but I don't think I went THAT far.

Besides, I don't usually publicly say when I have a waifu normally, unless someone takes an interest in said waifu.

It's really nothing personal.

Anyway, let's drop this topic, at least on this thread.
So anyone else think that maybe we can organize some time to play the new 3DS Mario Party together, if it has long distance multiplayer?

Hunter Axel wrote:So anyone else think that maybe we can organize some time to destroy our trusting and long-built friendships together?

Translated for the linguistically impaired.

I should translate visual novels.

What would we ever do without your skills, Vat?

Scept wrote:Oh, so you guys are always saying I need better waifus. But now that I found one, you're all "NO U CANT HAVE HER." Gee thanks, guys.

Get yer own damn waifus.

Leo you should just change the thread title to waifu arguing thread.

Now, now, what did I just say earlier? Enough arguing about such things here, Leo and Scept. Especially when a mod should know better.

For some people reading this post now, Wonderful 101 is out today. Why are you reading a forum post when you could be playing the game?

Hunter Axel wrote:For some people reading this post now, Wonderful 101 is out today. Why are you reading a forum post when you could be playing the game?

It's like you think I haven't already spent all my past cash on games as it is!

"the reveal of an unannounced title. Featuring director Itsuno Hideaki"

If only it was going to be Devil May Cry 5. The one we actually want. You know, with multiple playable characters, no DLC, plenty of cuhrayzee mechanics, addons to combat from 4, more fleshed out Nero and Vergil, an explanation of what happened in 4 per se, with the atmosphere of 1, and tons of content, and NO AWFUL STORYWRITING.

If it's DMC5 it's probably gonna be on iOS

Also Joey Jojo Kerfuffle tourney.
And Arino the Kachou himself on stage, holy smokes!
There's also gonna be a Tales segment but given how their latest "game" is also a phone game one that doesn't look that great I maaaaaaaaay or may not skip out on it, depending on the first five or seven minutes.

And for you PSO nerds, there's gonna be PSO talk.
For Haru there's Yakuza...
for Phoenix and Diabeetus-tan there's Project Diva stuff.

Dragon Quest, FFXIV Reborn, and yeah that seems like everything worth a mention.

Is it about Dragon Quest X? I'm wondering about whether that's any good.

HE UPDATED THE PAGE TO ASK PEOPLE TO CHECK OUT AND DONATE TO THE SHANTAE KICKSTARTER
THERE'S EVEN NEW ARTWORK TO PROMOTE THAT.

LOOK AT THE SUDDEN BUT FAIR SURGE OF MONEY FOR SHANTAE.

Also, WayForward is going to open up Paypal donations after the Kickstarter ends. Stretch goals will hopefully be reached through that, and they'll continue to offer all the prizes.

EDIT: Apparently the team behind MM9 and MM10 has been helping WayForward with Pirate's Curse and Half-Genie Hero. 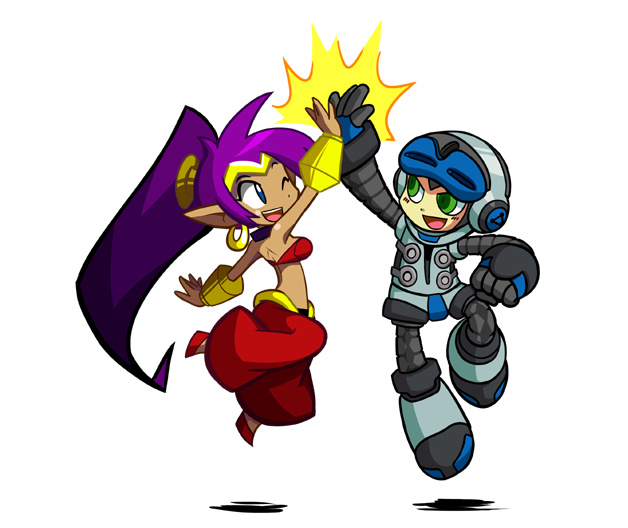 I crack ship those two now in headcanon.

The best part is that this is most likely just the START of things.

I want to donate the 10K to Mighty No. 9 just so I can meet Inafune, give him a massive hug, and tell him what an amazing guy he is.

I mean, that's probably what would've happened if I did donate that amount anyway, but this just put him over the edge of completely awesome.

Quick! Let's pool all our funds together! Maybe we can send Alpar there.

Wait, better. We send Alpar and someone else to record shame and shenanigans.